Presented was a 3 year old male dog with a 1 month history of periodic vomiting, weight loss (2 pounds), but animal was still eating and drinking.  The owner reported that one month ago, the family attended a BBQ picnic and the dog started vomiting the next morning.  They took the animal to an emergency clinic where radiographs and blood work were done but no abnormalities were noted.  The severe vomiting stopped in the next 24 hours and the animal started eating again.  After 1 month of periodic vomiting and noticing a growing lump on the animals side, the owner brought the animal in for an exam.  On exam, we noticed the lump was about baseball size and attached to the last rib on the left side of the dog.     The mass seemed to originate under the rib cage.  An x-ray was taken but no abnormalities were noted, so we preceded with an MRI.  After reviewing the MRI, a foreign body was seen extending from the lump into the stomach.  The animal was then taken to surgery where we found 3 BBQ skewers in the stomach, 2 of which had punctured through the stomach, penetrated the liver, and migrated through the body wall and were resting in between the last two ribs on the left side.  All foreign bodies were removed, the stomach was closed, body wall repaired, and the abdomen was flushed out.  The animal recovered normally from surgery. 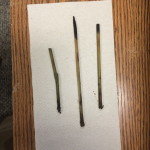 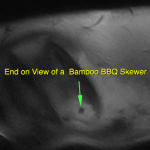