This dog is an 8 year old small mixed breed female that was presented for a sudden onset of seizure activity over the last 24 hours.  This animal had never had a seizure before, and was acting normal other wise.  Owner said animal was eating and drinking normally, and even playing.  The only abnormality they knew about was the recent seizures.  On exam I noticed the animal had an enlarged right pupil, but no other problems were noted.  When an animal has their first seizure after the age of 4 years, we always get concerned.  The MRI below was done on the animal the same day.  If your animal has a seizure later in life for the first time, with no previous history of seizures, please contact your Veterinarian. 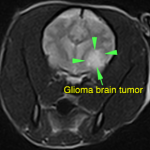