The animal in this case is a 2yr old female medium size mixed breed dog.  This case first presented with a weight bearing lameness on the right rear limb.  On exam, there was a mild amount of swelling noted in the right hock joint, but no other swelling noted.  The animal was mildly painful on flexion of the joint, but was still walking on the limb.  The owner opted for conservative therapy including rest and NSAIDS.  Two weeks later, the animal returned to the clinic with little to no improvement.  Radiographs were then taken and a small non-displaced fracture was noted in the right hock joint.  The limb was splinted for 3 weeks and scheduled for a recheck.  In 3 weeks the owner returned and reported the animal was doing good and walking on the splinted limb.  When the splint was removed, the swelling in the hock was noted to be larger.  This was concerning, so we recommended an MRI be done.  The MR scan was completed the next day and a tentative diagnosis of Synovial Cell Sarcoma was made by the radiologist.  The owner opted for amputation of the limb.  After the amputation, cells from the mass were examined and a confirmatory diagnosis of Synovial Cell Sarcoma was made.  This case demonstrates the sensitivity of MRI in diagnosing problems. 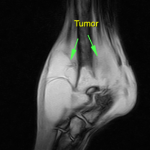 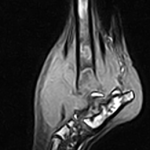 Hyperthyroidism in a Cat (Thyroid Neoplasia)
CAT WITH BLADDER SAND