The animal in this case is a 6 year old neutered male Welsh Corgi that was rescued from a Western Kentucky Shelter.  The owner just had the animal a few days when they noticed the animal was not walking normally.  They then took the dog to a Veterinary clinic in Paducah Ky, where is was discovered that this animal had a cervical disc issue with unknown duration since the present owners had just adopted the animal.  He was treated medically for the next week, but 8 days into medical therapy the animal became non-ambulatory and could not even hold its head up to eat.  The dog had become very painful when he tried to even move short distances in the house.  The Veterinary clinic then referred the dog up to us for an MRI and potential surgical correction.  Below you will see the dogs actual MRI. 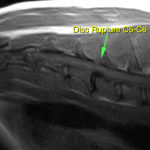 This case is unique do to the severe displacement of disc material into the cord.  The black area in the cord above is all disc material.  This animal underwent emergency ventral slot neck surgery and all disc material was removed from the spinal canal and the cord was decompressed.  The animal walked out of the clinic the next morning almost normally, and it was reported by the owner that the dog had returned to a normal gait within 3 days.  At the dogs 30 day post-op check the referring veterinary clinic reported the animal was doing great and was back to normal activity.