This dog was presented to the Haire Veterinary Clinic for non-specific signs of lethargy and not eating normally for the last 3 weeks.  This animal had been previously treated for pancreatitis and intestinal issues with no positive results.  The owner reported that the animal was getting worse each week.  On exam, the animal was reluctant to raise head to a normal position and owner reported that the dog would fall backwards when the head was held up.  The animal exhibited neck pain on palpation and was reluctant to move neck from side to side.  The owner reported that the animal had been running on an outside tie and had reached the end of the line while trying to chase at another animal.  They said when he reached the end, he flipped backwards.  The current clinical symptoms started 1-2 days later.  An MRI was preformed on this dog and a spinal cord injury was diagnosed extending from C2 to C5.  This case was treated with anti-inflammatories and should heal normally.  These types of trauma are not unusual, but without an MRI machine are almost impossible to diagnose.  If your animal sustains a sharp jerking injury to the neck, and is not acting normally afterwards, you need to seek veterinary help. 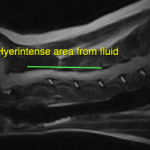 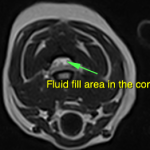