This dog was a 6 year old large mixed breed with a history of chronic nasal discharge and mild weight loss.  The nasal discharge had been present for 6 months, and had been treated with multiple antibiotics and NSAIDS.  When the animal came to us, the owner reported that the dog had been loosing weight and had a decreased appetite.  On exam, a severe bilateral nasal discharge was noted with a moderate amount of blood.  Both sub-mandibular lymph nodes were enlarged.  The lungs of this animal were rough on both sides and the owner reported the animal had developed a cough.  Chest radiographs were obtained and a moderate to severe pneumonia was noted.  We then recommended an MRI of the nasal cavity.  After the scan was performed, we noticed that the animals nasal cavity was severely effected.  The radiologist in the case made a diagnosis of disseminated nasal Aspergillus infection.  The prognosis for the condition are guarded to poor.  The owner opted for treatment and the animal was started on medicine to treat the Aspergillus infection.  The owner reported the animal was doing much better 60 and 90 days post treatment. 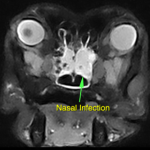 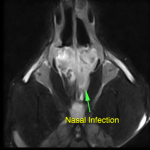