This animal is a 7 year old Boston Terrier with a history of chronic ear infections.  The animal had been treated with multiple antibiotics and topical ear medications prior to evaluation at our clinic.  On exam, severe bilateral otitis externa was diagnosed with a suspicion of a more internal disease being present.  The examining veterinarian noticed that the animal had a slight head tilt along with the clinical symptoms of external disease.  The owner opted for an MRI evaluation.  A diagnosis of a severe inner ear infection was confirmed with the MRI and no tumors were noted by the radiologist.   After the diagnosis was made, the owner opted for medical treatment in an attempt to avoid surgery.  This animals ears were packed with a sustained release medication, put on an oral anti-inflammatory, and treated with 3 weeks of oral antibiotics.  Surgical correction of the internal otitis was discussed with the owner if medical management was unsuccessful.  On recheck exam 2 weeks later, the animals external ear infection had resolved and the head tilt was much improved.  In this case, the MRI was able to demonstrate to us the severity of this animals infection so it could be treated in an appropriate manner.  An MRI should be considered on all animals with long term non-responsive ear infections.  More times then not, the disease is worse then what we can appreciate clinically. 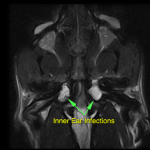 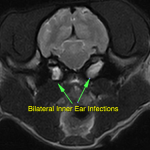